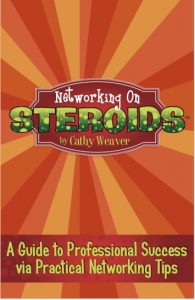 In April 2012, Networking On Steroids was born.  I began Networking full time in 2008 and attended as many groups as I could, not only to market my Kangen Water business, but to find a group or two where I could learn skills and techniques to climb me higher up the ranks for personal growth and development.

I was asked to speak to some of the groups I attended as far as techniques I was learning AND using, and before you know it, I was prompted to WRITE A BOOK so the audiences to whom I spoke would have reference materials/guides to help THEM through the various forms of Networking.

I had no idea the reach that Networking On Steroids would offer, from removing fear of talking to strangers to excelling in one’s field so THEY would then become the experts and the trainers for their Network.  It has been quite a journey, LITERALLY, as I have been asked to speak/train groups from Wisconsin to Kentucky and just about every where in between.

Zoom has been a phenomenal platform to not only help people SAVE MONEY paying for my travel to their location but offering a LARGE REACH for some of my training sessions.  If you have not used, mastered Zoom tele-conferencing system yet, I think you owe it to yourself and your travel budget to learn it.

Thank you SO MUCH for spreading the word about Networking via my first book, Networking On Steroids.  The fact that I am still getting purchase orders from Amazon is my clue that you are not yet finished learning some of the tips and techniques that I have learned the hard way, by trial and error AND now, implementation and compilation into ONE location.  Please follow my facebook page and I look forward to in person Networking with you, or perhaps, virtually.