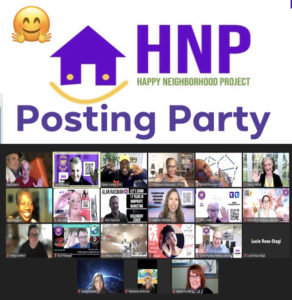 Well, a little over a year ago, I ‘found’ a Posting Party invitation on Linked In. It was #Free and #opentothepublic as it was a #Networking group I had not yet been attending.

The great news is, the host was very specific to the newbies as to the process for a Posting Party. I was there to ‘observe’ since I knew not what I was doing yet. There are multiple ways to increase organic traffic and to get more algorithmic love on each post that you do on Linked In, and thus far, my traffic was dismal, to say the least.

I watched, listened, observed, and for that hour, I ‘caught on’ to the procedure. I created my post, a dead plant, with the verbiage “Plants need #hydration too” and in less than a week, I had received almost 900 views AND I got 68 comments !!! This, my friends, was NOT my norm, so of course, I headed back to that Posting Party the next week for more, to see if it was just a fluke.

NOPE – NOT a fluke – the same traffic happened with each subsequent post so I was HOOKED on Posting Parties. Since that time, I have become very involved with an organization called The Happy Neighborhood Project and guess what ? This group offers 2 weekly Posting Party opportunities for its members and CoHosts – and NOW I get to be one of the facilitators. The traffic is amazing – the algorithm is phenomenal, once you figure it out, and the people who attend are SO amazing.

Next time you see, or get invited to a Posting Party, do not think about – JUST SAY YES – figure it out later. Fix your profile with a few tweaks and up your Linked In game. You will be SO glad you did.

Cathy Weaver began Networking full time in June of 2008, when she founded her Miracles With Water company. She started Networking all over the Greater Kansas City area and was soon referred to as a ‘Master Networker’. Her involvement in these groups over the years has actually awarded her designations such as 2012 Volunteer of the Year for the Olathe Chamber of Commerce; a four-time Bartlett-Olson Membership Achievement Award Recipient; and Cathy was voted into the KC Magazine’s 2013 Class of Most Influential Women. In 2018, Cathy was selected as the Kansas Women Business Advocate of the Year by the Kansas Department of Commerce. With the success of her Kangen Water business, dba Miracles With Water, Cathy also found the time to write 3 books: "Networking On Steroids" published in 2012, "He Hit The Clouds Running...and never looked back" published in 2017 and "Networking On Steroids PQ" published in 2020. From #water to #networking to #grief and beyond, Cathy may be that person YOU would like to have speak to your group, virtually, of course.

https://youtu.be/XUgM9i6iGk8 When you receive an invitation to attend a #Networking event, is the first thought, NO, I am BUSY ? I received such an invite in 2021 to the Happy Neighborhood...