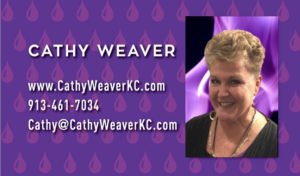 Cathy Weaver began Networking full time in June of 2008, when she co-founded her Miracles With Water company.  She started Networking all over the Greater Kansas City area and was soon referred to as a ‘Master Networker’.  Her involvement in various groups over the years has awarded her designations such as 2012 Volunteer of the Year for the Olathe Chamber of Commerce; a four-time Bartlett-Olson Membership Achievement Award Recipient;  and Cathy was voted into the KC Magazine’s 2013 Class of Most Influential Women.  Cathy’s most recent award was in October 2018 when she was selected as the Kansas Women Business Advocate of the Year by the Kansas Department of Commerce.

As a speaker and presenter, Cathy has had the privilege to speak to groups all over the Midwest.  She was in Lincoln, Nebraska speaking for a Kangen Water™ Super Saturday event and she has spoken to The American Business Women’s Association local Chapters, as well as the KC Area Council regarding “What’s In Your Networking Toolbox?”.   With the word spreading about this fun and informative seminar and with her first book being published, “Networking On Steroids”, The Grandview and South Kansas City Chambers of Commerce were the first to  ask Cathy to speak about one of her favorite subjects, Networking !!!

In 2014, Cathy was enlisted to join the ranks of faculty for the IOM, Institute of Organization Management, for the United States Chamber of Commerce, where her class, Recruit, Engage, Retain was greeted with MUCH enthusiasm.  Madison, Wisconsin was the location for that Summer Session and it just so happened that ten $10 gift cards from Starbuck’s gave hands-on examples of keeping guests ENGAGED !!!

One of the largest blessings in Cathy’s life, besides her precious family, is Kangen Water and the Enagic company !!! In 2014, Cathy became a Certified Enagic Trainer, joining ranks with only 200 other trainers IN THE WORLD, commissioned “To Spread True Health Globally With Compassion, One Family At A Time”.  This designation is the continuation of the Enagic mission statement, and has been the passion and the joy that can only come when we do what we love.

Cathy’s first book, “Networking On Steroids™” is all about helping people with Networking techniques.  Cathy speaks to many groups on her favorite subject of Networking and realizes that effective Networking is truly an ‘art form’ and she enjoys taking it to the next level. Tele-conferencing is the preferred method for presenting now, of course.

Cathy’s next book was released on July 1st, 2017 and is a memoir of her experience with death and dying and survivorship. This book is not publicly available but Cathy is more than willing to send her publication to you in paperback form or via a tele-conference call.  This book has served as a platform for others to share openly about the pain and loneliness during the grief journey, offering LIGHT at the end of the tunnel.  Her ability to deal with grief and bereavement may offer some insight and techniques that few others have thought of before.  Connect with Cathy at Cathy@CathyWeaverKC.com to request your copy of her new book, “He Hit The Clouds Running … and never looked back … “.

With the Pandemic of 2020 forcing everyone to pivot in their personal lives and their business lives, Cathy wrote a sequel to her first book called “Networking On Steroids PQ™”. This book is  A Guide to Networking In A World, Post Quarantine. Networking is such an effective tool and there are so many ways to stay connected AND build one’s Network, even in this PQ environment. Let’s zoom !!!